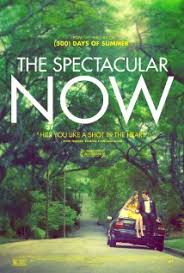 Sutter Keely (Miles Teller), a charismatic, life-of-the-party 18-year-old, wakes up on an unfamiliar lawn the morning after being dumped by his girlfriend, Cassidy (Brie Larson from The United States of Tara). Standing over him is Aimee Finicky (Shailene Woodley), a nerdy girl from his school.

Hungover to hell and with no idea where he’s left his car, Sutter accompanies Aimee on her paper route so he can find it. From here, a friendship blossoms between the two teens – who, amazingly, look like real teenagers and not some Hollywood airbrushed-to-perfection clones. Sutter tells his mate he wants to help out the intelligent but socially awkward girl, and so begins taking her to parties and making promises about prom dates.

However, this isn’t your stereotypical young romance.  The two do fall in love, but Sutter – whose motto is to live for the now – has significant emotional baggage; if not constantly drunk, he’s on the verge of it. He carries around a monogrammed flask to spike his sodas, goes to school and work drunk, and drives drunk. Hence why the original girlfriend dumped him.

Aimee doesn’t see this. Instead, the girl who has been ignored by boys all her life is infatuated with Sutter and more or less comes down to his level. On the upside, he does help her to value herself and stand up for herself, but when Aimee demands Sutter do likewise, things go badly.

This film starts a little slowly, yet soon picks up pace. It is also a refreshing change from many blockbusters in that the kids actually look and speak like real teenagers, with the story inherently character-driven rather than plot-driven. Aimee is even without make-up for most of the movie – imagine that!

The screenwriters have done an excellent job of bringing Tom Tharp’s novel to life, and I would highly recommend The Spectacular Now to teens and adults alike. You’ll like it if you’re into great dialogue and acting; you won’t if you prefer your movies peppered with car chases and explosion scenes.